This notion of animals as having a healing
effect on humans is almost intuitive,
considering our history in seeking
their companionship.

Humans have been in close partnership with animals throughout most of recorded history. We have depended on their working with us for our survival as they have tended livestock, guarded our homes, and hunted for game, among other types of work. Evidence of animals as companions has also been traced to the very beginnings of human history. The symbiotic relationship continues today and is gaining recognition as a therapeutic modality. This notion of animals as having a healing effect on humans is almost intuitive, considering our history in seeking their companionship. When looking at the therapeutic value of the human-animal bond in alleviating pain and associated symptoms, research is in its initial stages. 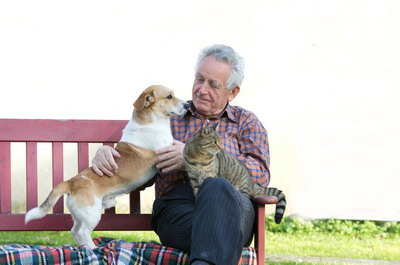 Animal-assisted therapy (AAT) is the term most often used when animals are utilized as a therapeutic modality. AAT is used in a variety of settings by nurses, occupational therapists, physical therapists, speech and language pathologists, and psychologists, along with additional health professionals. It is utilized for a variety of conditions in children, adults, and older adults.

In 1860, Florence Nightingale is believed to have used animals in health care for the first time (1). She recorded that small pets were good companions, especially for the chronically ill. Over time, dogs, cats, horses, birds, and a variety of other animals have been used therapeutically. Most of the literature available on AAT involves the use of dogs.

In 2012, a study looked into the effects of AAT on patients with chronic pain who attended a pain management clinic(2). Some patients received brief therapy dog visits during their time in a waiting room. Others did not receive a therapy dog intervention in the waiting room. Overall, researchers found that pain, fatigue, stress, and mood were significantly improved for the patients who received the intervention. There was no improvement in these factors for those who did not receive the therapy dog visits.

In 2013, a follow-up study was done with fibromyalgia patients(3). Fibromyalgia is a disorder characterized by widespread muscle pain that is accompanied by fatigue, sleep, memory, and mood issues. The setting and methods were similar to the previous study. Findings were also quite similar. For the patients who received the brief therapy dog visits (only about 12 minutes), significant improvements were reported for pain, mood, and measures of distress. Again, these improvements were not experienced by the patients who did not receive therapy dog visits.

It was found that the patients who
participated in the AAT had a noticeable self-reported reduction in depression
immediately following their treatments.

Yet another study addressed the occurrence of depression in cancer patients who were undergoing chemotherapy(5). Participants were being treated for a number of cancers, including breast, gastrointestinal tract, lung, head and neck, and other organs. AAT was provided in 20-minute sessions by a trained therapy dog and its trainer while patients underwent chemotherapy. It was found that the patients who participated in the AAT had a noticeable self-reported reduction in depression immediately following their treatments. This was not found in patients undergoing chemotherapy who did not receive AAT. 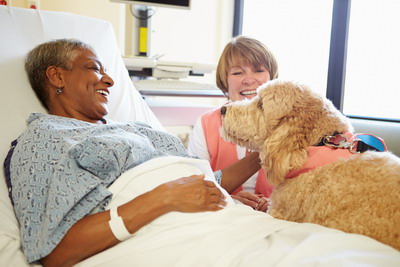 In this study, blood levels of oxytocin (a hormone that serves many functions, but is well-known as having an important role in decreasing stress and anxiety) were analyzed intermittently in dog owners while interacting with their pets(6). Overall, oxytocin levels peaked after only one to five minutes of normal interaction with their pets. Also, the owners’ heart rates reduced significantly after about an hour of interaction, indicating that the owners achieved a more relaxed state.

Much more research is needed in order for AAT to become more widely accepted as a valid therapeutic intervention. Many studies are indicating that it takes a very short period of AAT for an individual with pain to experience therapeutic benefits. This has very exciting implications for health care providers and patients who suffer from chronic pain. It is a relatively easy and cost-effective intervention, with a very limited potential for side effects.

Cost-effectiveness is certainly key as we look into the future of health care. If AAT can gain recognition through solid research and increased application, it may be that health insurance entities will be willing to pay for this low-cost intervention.

For people who suffer from chronic pain, interaction with dogs may be helpful in reducing pain, reducing depression/anxiety, and improving mood. The best news is that brief interactions may make a significant difference. To reap the benefits, one only needs to find a dog who is safe, responsive, and affectionate. Dog ownership can be absolutely life-giving, but the costs and physical care of a dog may be too much of a burden for some. Some possible ways to have good interactions include volunteering to walk and/or provide limited care for a friend or neighbor’s dog, volunteering for play-time at a local animal shelter, or just having some planned visits with a friend or family member’s dog. Some caution does need to be exercised. Dogs may have behaviors that could exacerbate symptoms. For example, a large dog who has not been trained to not jump up on people is not a good match for someone with chronic pain. Another example is a dog who may suddenly pull on its leash when it sees another animal or a person, which could lead to exacerbated pain. Obviously, this is not advised for people with pet allergies.

Fortunately, AAT itself is a viable option for people who have chronic pain. This is the ideal scenario, because therapy dogs are trained and sometimes even bred for the characteristics needed to do this work of providing therapeutic interaction. The American Kennel Club website provides a long list of AAT-providing organizations at this address:

Therapy for the Therapist

The pain and fatigue felt unbearable. After many years of milder symptoms, I found myself stunned at the severity. I felt desperate and in need of answers. So, at the age of 27, a rheumatologist explained to me that I had fibromyalgia, and that I would experience pain for the rest of my life. In my head, I knew that my diagnosis could be far more devastating and debilitating, but this did not stop a heavy feeling of despair from settling in.

My mind turned its focus away from my own pain, fatigue, and despair as it turned to the more practical matters of a little guy who needed me.

A few months after receiving my diagnosis, I had the notion to get a puppy. I had many wonderful childhood memories of owning a dog. However, I did have some reservations, knowing the sleep interruptions and other physical tasks required to care for a puppy. With that in mind, my husband and I still decided to find a Standard Poodle pup. Perhaps it is more accurate to say that I talked him into it! At first, our puppy did interrupt my sleep and require a lot of attention. Fortunately, I did have my husband’s help for some of the puppy care. Slowly but surely, my attention began to shift. My mind turned its focus away from my own pain, fatigue, and despair as it turned to the more practical matters of a little guy who needed me. I leash-trained and socialized him. I began to feel better, physically and emotionally. After a long hiatus from cross-country skiing, I was even able to go for a short ski. The skiing continued along with walking, always with my canine companion. Of course, the exercise further decreased my fibromyalgia symptoms. 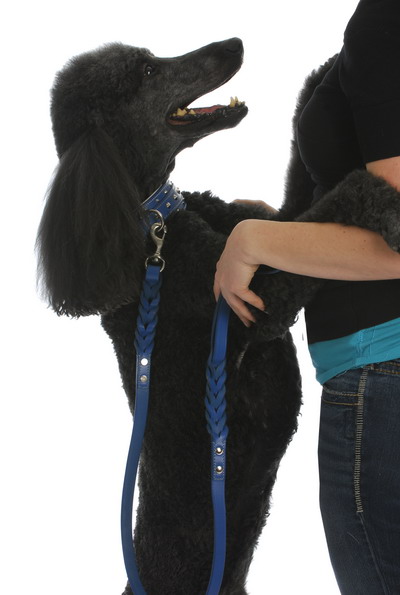 With a large dog, I was somewhat forced to provide him with daily exercise (even in cold weather), unless I wanted his boundless energy to be taken out on our small apartment. I continued to improve. It was not very long before we moved to another state, and our daughter was born. My fibromyalgia symptoms flared up again. I felt isolated. His ability to lay his chin on me or lean into me at just the right time were a great comfort. Since then, my symptoms have waxed and waned, but his persistence with me has never wavered.

My buddy, Satchmo, is old and frail now. He suffers from Addison’s disease and severe osteoarthritis. It is my turn to alleviate his suffering. I give him pills for pain and extra treats. I pet him and talk to him. I help him and praise him when he struggles to get up. I do what I can. In the end, I doubt that what I do for him even comes close to all that he has done for me.

About the Author: Kristen Counts is an occupational therapist and freelance writer who has fibromyalgia. She lives in rural Indiana with her family, which includes one beloved Standard Poodle.