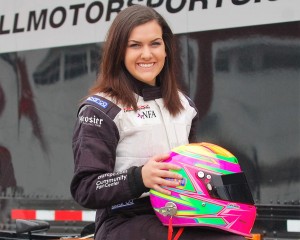 My name is Jenna Grillo, when I was only 9 years old I was diagnosed with Fibromyalgia. Fibromyalgia is a chronic pain syndrome, the most common symptoms are widespread pain, fatigue, sleep difficulties, brain fog, morning stiffness,  muscle knots, cramping, weakness, headaches/migraines and balance problems.

When I was 8 or 9 I started noticing symptoms, I started getting pain all over my body, I was extremely tired all of the time. I went to multiple doctors and was getting tested for almost every disease and condition my doctors could think of. Finally I found a rheumatologist who diagnosed me with Fibromyalgia, I remember being so relieved to know what the problem was. Since Fibromyalgia doesn’t have a cure, and I was too young for the medications, I had to work on dealing with the pain with various treatments and doctors.

Throughout the years I have learned how to work through the pain. There are multiple times that I have showed up at the race track in a lot of pain and wondering how I would get through the race, although with my supportive family and my determination I always pull through. when I get in the kart or car the pain goes away until I get the checkered flag. I fight every day to do simple tasks, but when it is race day all of that gets set aside and I get consumed in the race.

I plan to use racing as a way to reach out to others with Fibromyalgia and show everyone that you can’t let the pain stop you from living your life and doing what you love!  I will share my story with everybody, and I hope to be able to continue to inspire people with my story. 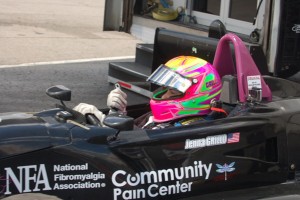 I currently reside in Indianapolis, Indiana and I am 19 years old. My parents brought me to the 2007 Indy 500, and my entire life changed.  I had been a competitive dancer since I was three years old, so I had no idea what to expect. I was definitely on the Danica Patrick bandwagon. Seeing a beautiful woman in a field of all men race car drivers was so amazing to me. When the race started my eyes were glued to the race, and I was cheering her on. I even borrowed my uncle’s headphones and tuned into all of the drivers radios, although my uncle didn’t get them back until the race was over.

​I was always amazed at the strength it takes to reach that level of racing in a male dominated sport. My family and I had a twelve hour car ride home. I sat in silence for about an hour deep in thought; finally I asked my Dad the steps I would take to become a race car driver. My Dad said that he thought karting is the first step. he figured it would be an expensive sport, although he liked the idea of tires and gears rather than sequins and tap shoes. The next weekend we went to a race at a nearby track, and we ended up buying a kart, the following weekend I started racing. Ever since that weekend, I have been improving, and moving towards my racing career.

​After a few years of karting I left my local track and began racing regionally in a 125cc stock Honda shifter kart. I started by winning my first race, and the following and so on. I was awarded the SKUSA S5 (junior shifter) Midwest championship! After the regional season ended I decided that I wanted to take it further, so I attended the SKUSA SuperNationals which is one of the biggest kart races in the country. With 500+ racers from all over the world, this could be very intimidating, although the only feeling that I had was excitement. The next two years I attended the regional series as well as the SKUSA Protour (national series). In 2013, I moved up the S2 (semi-pro) class, and won the SKUSA S2 Midwest championship.

​ In 2013, at the Rock Island Grand Prix karting street race in Rock Island Illinois, I was introduced to the Intercontinental Trophy Cup Series owner, Dougie Livingston. He recognized my passion for racing and encouraged me to begin testing in their Spec Porsche Cayman racecar. I have tested this car at Putnam Park in Indiana and the famous Sebring Racetrack in Florida.  Through these test days the ITC team has confidence that I am ready to begin racing at this level.

Tired of being in pain?  If you want to sleep better, with less pain, and awaken refreshed, choose the Sooth Ewe Wool Mattress Topper.

It will transform an ordinary bed into a plush, naturally soothing escape from pain!

Enter promotional code FMS75 when purchasing a topper and you will receive $75.00 of your purchase price.